So regardless of whether you’re a fan or not, the Pokémon fever has been completely inescapable since last week. Love it or hate it, you have to marvel at the game-changing hype machine that has gripped the planet. But I’m not here to talk about the game itself or the subsequent flu it gave me from being dragged around the neighbourhood by my superfan wife at 11.30 at night in the middle of winter the day of release. I’m actually going to talk about this: 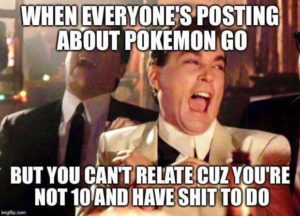 Because apparently the things you like have to have an age limit.

Somewhere along the line being an adult crossing into mortgages, Tupperware parties, soul crushing jobs and not liking anything you grew up with? The same people decrying 30yr olds playing Pokémon Go are probably the same people that wouldn’t hesitate to chuck a $20 into a slots machine or bet on the races, or continuously send Farmville invites over Facebook until they are blocked into oblivion.

Maybe it’s just me and I’m meant to be tagging around with the lost boys or whatever, but I didn’t realise that growing up meant that you had to immediately cease liking all the things you like, and be “serious”. I have a Nerf gun collection downstairs, I collect action figures from terrible 90’s TV shows and will sit up with my partner binge watching Adventure Time because we’re adults and being an adult means you can do whatever the fuck you want with your free time and your money.

Maybe it’s a case of us Gen Y’ers yearning for nostalgia fests of Pokémon Go because for a few brief moments we can get out into the sun, and be reminded of a time when life was simpler and we weren’t facing insurmountable government debt, a housing market that is priced out of affordability for us, a shut window on our ability to tackle climate change and basically for five minutes try to forget that we are fucked on a global scale while we go and catch yet another fucking Zubat.

We have the “baby boomers” telling us constantly how “entitled we are” and how we want everything yesterday, as decreed by the generation that got free education and could by a house for $30,000. This from the generation who have fucked the housing market by buying up everything and negatively gearing their assets, pushing the average price of a house in Sydney to a bee’s dick below a million dollars, while incomes have not increased to the same inflation rate to cope, THUS ensuring that the “great Australian dream” was killed off by our predecessors. This from the generation who systematically fucked the environment with industry and continuously rail against climate change despite overwhelming fucking evidence to the contrary leaving the rest of us to deal with the catastrophic fallout. Can you honestly blame us for deciding to put on a hat and saying “fuck this shit, I’m headed out to catch Eevees”?

Dialling back on the nihilism for a moment, maybe it’s a case of other people feeling the need to validate their own choices by putting down others for perceived “childish things”. My partner once had some complete stranger tsk at her choice of ice cream in the supermarket freezer section, labelling it “childish”. What the fuck makes a Neapolitan style ice cream of Banana, Bubble Gum and Fairy Floss childish? You said “Fucking delicious” wrong you bitter cantankerous Luddite.

While the hype train is in overdrive for Pokémon Go, what many fail to realise is that it’s more than just a game. It’s exercise in disguise. It’s adventure via a phone app. This is modern technology aiding as a catalyst for people to get outside, get moving, explore the world around them and not be afraid to talk to people. I have talked to more complete strangers in the last four days than I think I ever have in my life. The game provides a social link across diverse boundaries and gives us common ground from the instant we spy the map on each other’s respective screens.

Yes it can be daunting to see a sea of people in the city staring intensely at their phones (moreso than the usual number of people staring at their phones anyway) or moving in huddled packs or racing down the street at 3 in the morning screaming “THERE’S A CHARMANDER DOWN AT THE PARK GUYS” – yes, I heard you there’s no need to wake the neighbourhood – but it’s ok, it’s just people having fun in the 21st century.

Why does anything that brings a person joy have to have an age limit? I don’t give a shit if you’re 20 and into knitting, or 50 and into My Little Pony. You should not be shamed about the things that make you happy just because some other asswipe feels that they need to fanoogle you into making the same choices they did to justify their own existence.

Do what you love when you want, because if that isn’t what being an adult is all about, then what’s the point of being up writing this article in my marvel pj’s eating froot loops with baileys instead of milk?